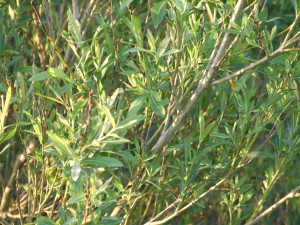 Old Irish/Gaelic – Saille – related to the Latin salix, meaning “Willow”. Salicylic acid which is extracted from the bark of the White Willow (Salix alba), was one of the original ingredients in making the painkiller ‘Aspirin’ in 1897.

Celtic Deity – Cerridwen – ancient Scottish and Welsh Goddess of the Moon. She was wife to the giant Tegid and mother to a daughter – Creirwy, who was beautiful – and two sons, Avagdu and Movran – who were said to be not so lucky with their looks .. 😕 In an attempt to help her two boys she brewed up a potion in her cauldron that would give them inspiration and knowledge, leaving Gwion Bach to stir it for her. But Gwion Bach accidentally drinks three drops of the potion, thereby negating its potency so Cerridwen chases him, with both of them shape-shifting until she as a hen eats him as a grain – she then becomes pregnant with the infamous bard Taliesin! – Bards in Wales used to call themselves “sons of Cerridwen”. She is associated with inspiration, knowledge, wisdom, death, fertility, magic and herbs, and is sometimes linked with the Greek goddess Hecate.